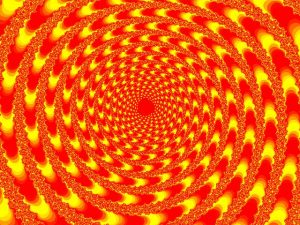 What Does the Fractal of Calcination Represent?

In alchemy, operations are separated in a way that is best left to a visualization. The most common one used is called an alchemical mandela. It allows true alchemists to better understand the relationships between processes that happen during the great transformation.

The most common symbol is the “Azoth” which depicts an alchemist surrounded by a spherical star. The symbol is separated into different levels, each to represent the various operations in alchemy.

But the image above is meant to represent the first operation which is called “Calcination.”

Movement through the Azoth happens in a clockwise pattern. This represents the journey one must make between each step up the Planetary Ladder. The scene in the spiral-like image portrays the first operation of Calcination, which calls for Fire – one of the primary elements – to be used to burn away dross and locate essences.

Alchemists believe that fire or flame is the primary agent of transformation. That is at the heart of Calcination.

“Calcination” comes from the Latin root of calx, which translates to bone and limestone. To calcify something is to burn it, whether that be to change its form, or cremate it. Once Calcination is complete, the substance should no longer be affected by fire.

In a lab, Calcination happens when a substance is warmed or heated over an open flame. This is done by placing it into a crucible, and leaving it exposed until its reduced to ash. Acids are actually considered a type of liquid fire and count, just as conventional flame. Sulfuric acid is a common fire-like material used to corrode or melt away other materials.

When you’re talking about the body, Calcination is experience during aerobic activities or metabolic processes. The body naturally burns off excess fat and waste, becoming more efficient. True Calcination of the body starts with the Base or Lead Chakra. In case you are not familiar, the Lead Chakra in the body is located right at the sacral cup near the base of the spine.

There is a psychological aspect to the Calcination operation, as well. It occurs when you experience the destruction of your negative ego and any attachments you have to material possessions. This level of attunement is difficult to obtain, but definitely possible.

Ultimately, Calcination is humbling, and takes into account the many trials and tribulations we must bypass throughout life.