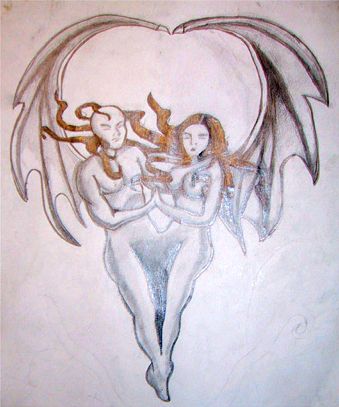 The image you see here is called “Conjunction” and it was created by Steve Hauck. Steve regularly depicts modern alchemical concepts and actually has several pieces of his art featured here on AlchemyLab.com.

The definition of the word “conjunction” means when an instance of two event occur or conjoin at the same point in time or space. We can gather from that definition and the image above that triumphant spirits have joined as one in the interest of good nature.

A student at the Chicago Academy of Art, Steve Hauck’s pencil and charcoal renderings capture the spirit of transformation on an intensely personal level. His intuitive grasp of alchemical operations is impressive, from the exposure of the Quintessence in “Thread of Life” to his stark rendering of the materialistic Homonculus in his “Golem Series.” However, his insight shows most strongly in the themes of alchemical disintegration shown in “Dissolution” and “Shedding Identity” and in the hopeful resurrection of the triumphant spirit shown in “Conjunction.”  © Steve Hauck 1995-2002.